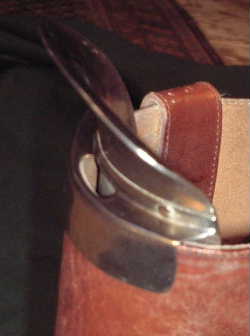 I have seen these curved metal plates described as “jockey lifts” “boot jockeys” and “boot slides”. The 1933 Swaine & Adeney catalogue goes with “jockey lifts”, so that’s good enough for me.

They are actually a cunning dressing aid , the lip hangs over the outside of one’s boot – giving a smooth curved metal plate for the leg to pass over into the boot.

This would have been particularly important before today’s modern elasticated fabrics. The legs of heavy twill breeches were buttoned or laced up and could easily have rucked up inside close-fitting boots. This would have been horribly uncomfortable.

I have always seen the lifts sold in pairs, and assumed that they always came that way. One slide would be positioned at the front of the boot and one at the back. However, it appears that Swaine & Adeney also sold them singly in the 1930′s and I found a pretty interesting single example this week. 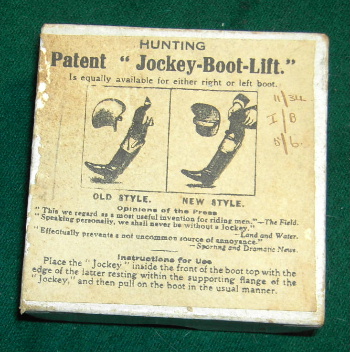 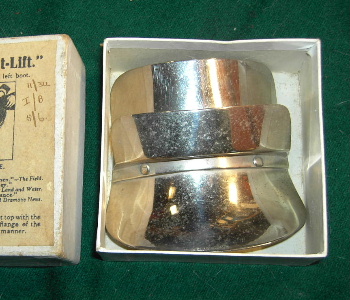 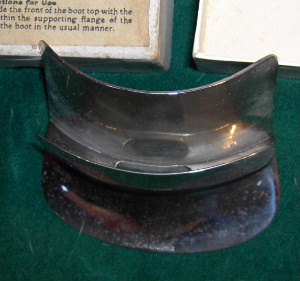 This lift comes in its original box.

It then shows the old style lift compared to the new (frankly I cannot see much difference).

Reviews come from several magazines : The Field (still around today), Sporting and Dramatic News (great title eh?, it was in print between 1845 & 1943) and Land & Water (a weekly journal published between 1914 & 1920, and edited by Hillaire Belloc – he of the cautionary tales, amongst other, more serious works). Anyway, this last publication usefully dates the new lift to between 1914 & 1920.

The box also helpfully gives instructions for use : Place the “Jockey” inside the front of the boot top with the ege of the latter resting within the supporting flange of the “Jockey” and then pull on the boot in the usual manner.

This entry was posted in Uncategorized and tagged boots, riding, vintage. Bookmark the permalink.