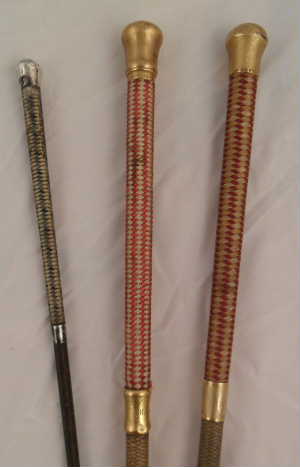 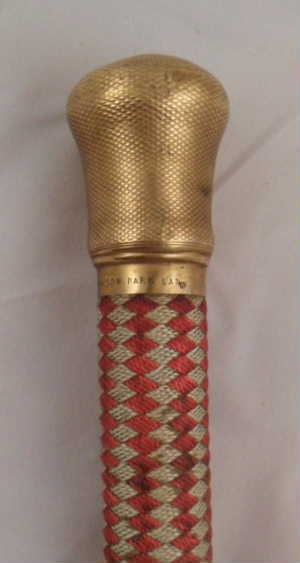 Next time I find myself cringing at the sight of a neon pink riding whip or a crystal encrusted browband perhaps I should reconsider.
“Bling” has been with us in the horse world for quite some time.

An antique dealer friend once told me that Victorian riding whips were all about “power, sex & status”. He had a point – before sports cars and ipads came along a fine horse and elegant attire were pretty good ways of advertising one’s wealth and taste to the world.

Personally, I prefer the gold and silver mounted whips on the left to today’s more “colourful” examples.

I bought the thinner sidesaddle whip on the left a couple of years ago. It has a silver cap and collar. The cap is engraved “Callow & Son Park Lane”. The handle of the whip is covered in finely braided silk. The braiding is really well done, the threads of the blue sections are arranged so that the colour fades from dark to light in each section.

Callow & Son are listed in the 1879 “Dickens Dictionary of London” by Charles Dickens Jr – the publication only listed tradesmen / shops which had a Royal appointment. Swaine & Adeney and Callow & Son are listed under whipmakers. (As an aside, Charles Dickens Jr was the son of Charles Dickens the novelist, the son was responsible for many publications including Dickens’ Dictionary of London, an Unconventional handbook. It is full of useful information such as the location of the nearest racecourse or workhouse – perhaps the latter was necessary after the former. Anyway, reprints are available, or find it at victorianlondon.org )

Back to whips – I have just acquired the two heavier whips. They were sold as racing whips. For once I know a little of their background – they were sold by the Earl of Lonsdale at Christies in 1980.

Both have woven silk covered handles and 15 carat gold caps and collars. One is engraved “Callow & Son Park Lane”. The similarity to my other whip intrigued me, so I thought I’d research Callow & Son a little more – I was quite excited to find a Thomas Callow recorded as a London silversmith in the late 19th century – but it isn’t the right Callow. One of these whips has the goldsmiths mark “TJ”, probably Thomas Johnson, and the other “EHW”, who I can’t identify.

I have seen another whip for sale with a braided silk grip like these – also by Callow & Son. It is possible that they were the only company of whipmakers who used this style of decoration.

I visited Tyntesfield in North Somerset a while ago. (Tyntesfield is a fantastic house owned by the National Trust which still has most of its victorian interior & contents – read more here )

In the entrance hall there was a whip rack which held a hunting whip and a couple of sidesaddle whips. One had a decorative threadwork handle (see later images), and the other was braided blue silk. Now I wonder if it was also made by Callow, I should have asked to look more closely at it at the time. I guess I’ll just have to go back…

This entry was posted in Antique Whips and tagged crop, racing, victorian, whip. Bookmark the permalink.

One Response to Antique Racing Whips