These are bolas, or, more accurately boleadoras : 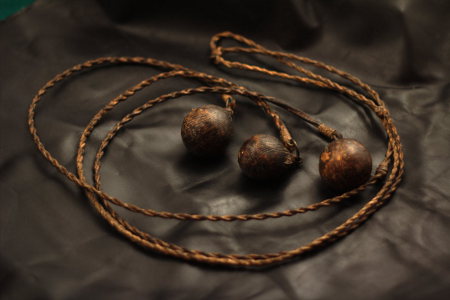 They came from South America. Similar arrangements of throwing stones and ropes were originally used by the indigenous people, but after the arrival of the Spanish they were adopted by the gauchos. They were used for hunting and herding – the balls would be swung around to gain speed and then released, wrapping themselves around the quarry animal’s legs. Charles Darwin describes the process better than I can in his diary entry from the Beagle on 8th September 1832 :

“… The Gauchos were very civil & took us to the only spot where there was any chance of water. — It was interesting seeing these hardy people fully equipped for an expedition. — They sleep on the bare ground at all times & as they travel get their food; already they had killed a Puma or Lion; the tongue of which was the only part they kept; also an Ostrich, these they catch by two heavy balls, fastened to the ends of a long thong. — They showed us the manner of throwing it; holding one ball in their hands, by degrees they whirl the other round & round, & then with great force send them both revolving in the air towards any object. — Of course the instant it strikes an animals legs it fairly ties them together.”

He also quite charmingly describes his own efforts at throwing them :

“One day, as I was amusing myself by galloping and whirling the balls round my head, by accident the free one struck a bush, and its revolving motion being thus destroyed, it immediately fell to the ground, and, like magic, caught one hind leg of my horse; the other ball was then jerked out of my hand, and the horse fairly secured. Luckily he was an old practised animal, and knew what it meant; otherwise he would probably have kicked till he had thrown himself down. The Gauchos roared with laughter; they cried out that they had seen every sort of animal caught, but had never before seen a man caught by himself.” 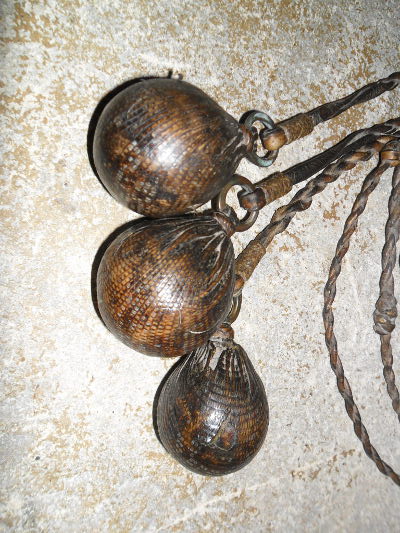 Very early examples often took the form of a simple stone with a groove cut around its middle which would hold a rope or cord. Many were made of stones wrapped in wet leather or rawhide which would shrink around these weights as it dried. The weights above are covered in lizard skin and their ropes are made of twisted rawhide. There are some very ornate examples made from ivory and silver which were intended for parades & display, not for use.

Not all bolas have three weights, apparently they can have eight or nine, but the more common arrangements are :

In the boleadora one weight is usually lighter than the other two and has a shorter rope – the smaller weight is held in the hand and used to sling the bolas. The disparity in weights and rope lengths helps the bolas to spread out & inflences their trajectory. In the example below there is a single larger, heavier weight on a longer rawhide rope. I suppose it was made to suit the individual gaucho who used it. 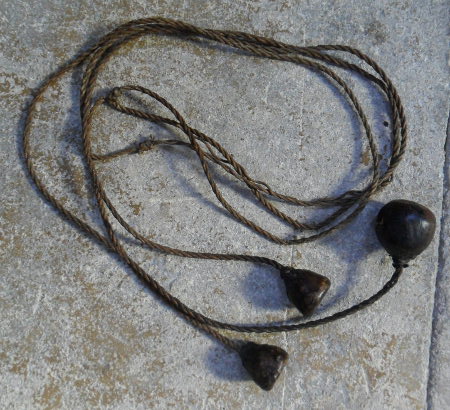 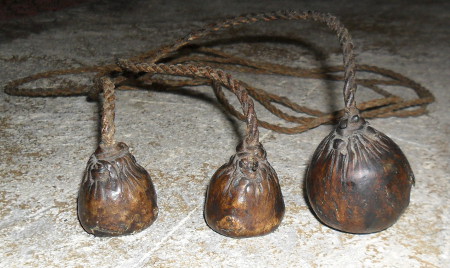 There’s a video (with a splendid beard) here (not wild about the bird welfare apect, but it seemed unharmed)

This entry was posted in Uncategorized and tagged bolas, boleadora, gaucho. Bookmark the permalink.