This image attracted me to the Project Gutenberg Ebook of Alice M. Hayes’ “The Horsewoman, A Practical Guide to Sidesaddle Riding” (The whole text can be read here )

The front page of the book tells us that it is the 2nd edition, published in 1903, it was edited by Capt M. HORACE HAYES, F.R.C.V.S. (Late Captain “The Buffs”, Author of “Points of the Horse,” “Veterinary Notes for Horse-Owners,” “Riding and Hunting,” etc.) and that Mrs Hayes was also the author of the intriguingly titled “My Leper Friends”.

“SAFETY STIRRUPS,
both for men and ladies, have been in existence for hundreds of years.

Apparently the first variety of this contrivance was the capped stirrup-iron, either simple (Fig. 18) or in the form of a slipper (Fig. 19), which was provided with an arrangement on its sole that prevented the toe of the slipper from yielding to downward pressure, but allowed it to revolve upwards, and thus to facilitate the release of the foot, in the event of a fall. The simple capped stirrup was used by ancient Spanish Cavaliers, and is still employed by many of their descendants in America.”

(The author does not show us these stirrups but I assume she means the Iberian “box” stirrup : 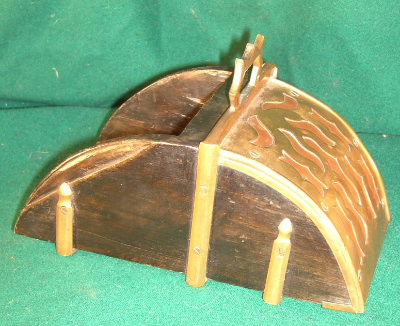 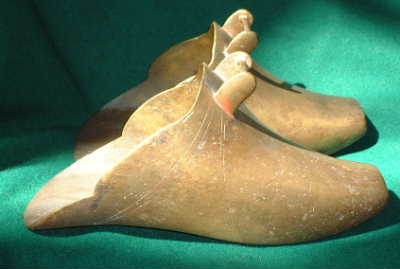 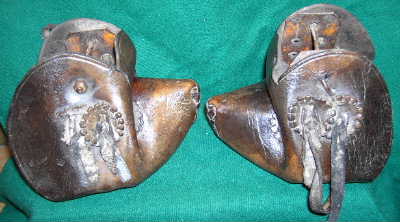 Back to Mrs Hayes:

“In apparent oblivion of these facts, the Christie stirrup (Fig. 20), made on the same principle, was patented about four years ago.

Besides its undue weight (1¼ lb. as compared to the ½ lb. of the slipper stirrup), it has the further disadvantage of allowing the possibility of the toe being caught between its bars (Fig. 21).

Fig 21. A foot caught in a Christies’ stirrup

Want of neatness appears to have been the only cause of the abandonment of the capped stirrup, which is certainly safer than any of its successors, the first English one of which appears to have been the Latchford safety stirrup (Fig. 22). It consists of two irons; the small one, which is placed within the large one, being made to come out the moment the foot gets dragged in it, in which case it parts company with its fellow, and is then liable to get lost. 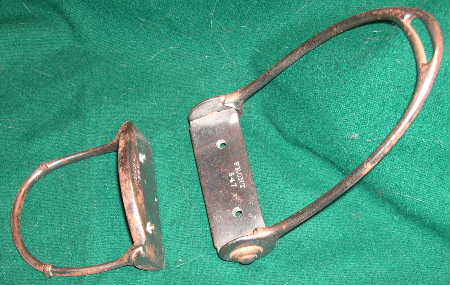 The Scott safety stirrup (Figs. 23 and 24) has not this fault, for its inner iron always retains its connection with the outer one, and can be replaced without delay, if the lady after her tumble desires to remount.

The Latchford, Scott ordinary, and Cope safety stirrup (Figs. 25 and 26) open only one way, so that the foot, when correctly placed in any of them, may not be liable, as in the event of a fall, to be forced through the outer iron, in which case the lady would almost to a certainty get hung up if her saddle was not provided with a safety bar. In these stirrups, the side of the “tread,” which ought to be to the rear, is generally indicated by the fact of its being straight, while the other side is curved (Fig. 24). This is done in the Scott stirrup, by the word “heel” being stamped on the rear part.

The chief faults of so-called safety stirrups are as follows:—

Some ladies think it “smart” to ride with a man’s ordinary stirrup iron, or (madder still) with a small racing stirrup, attached to a leather which does not come out. I once saw a lady who adopted this senseless plan fall and get dragged. By an extraordinary piece of good luck she was saved from a horrible death by her boot coming off.

All that can be said in favour of safety stirrups, is that they are less liable to cause accidents than ordinary stirrups. The fact remains, that the danger of being dragged by the stirrup can be entirely obviated only by the use of an efficient safety bar.”

And so ends the chapter.

Alice M. Hayes sounds like a remarkable woman, and I really want to believe that she posed for those photographs of falls herself…