Horse bits have been occupying my thoughts for a few reasons this week.
I was in Oxford so took the opportunity to visit the Ashmolean Museum. 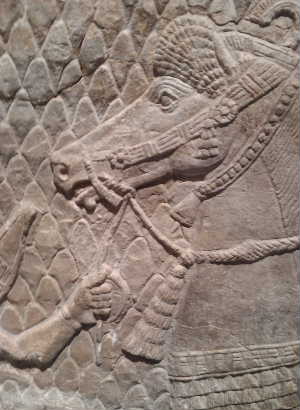 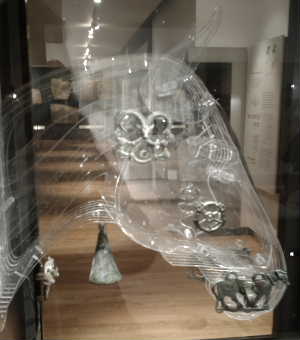 Pretty well the first exhibits I saw were horse bit related. There was a piece of an Assyrian stone relief carving showing a bridled horse with curved bit cheekpieces.
The relief was dated between 704 & 681BC and came from the palace of Sennachereb in Ninevah, Iraq.

Next to it was a rather clever transparent horse head displaying bronze bridle fittings and a bit from Luristan.
The Luristan pieces did not photograph so well through the glass, but it was interesting to see the position of the various harness ornaments and the bell hanging under the throat. The bit has the characteristic Luristan cheekpieces cast as creatures, in this case horses. I was lucky enough to buy a Luristan bit a couple of years ago – there are images at www.sportingcollection.com/bits/bit328/bit328.html
Compared to many ancient bits the Luristan example is pretty benign, it has a straight bar mouthpiece (admittedly it’s pretty narrow, and there are sometimes studs on the insides of the cheekpieces, but by ancient standards it is quite humane).

There was an example of a bit with “echini” or hedgehog mouthpiece, its cabinet was too dark to photograph it, but this is the sketch I made to remember it – this example came from Deve Huyuk in northern Syria and dates from 480-380 BC. I have read that such bits were used with a loose rein, certainly that seems to have been the ideal described by Xenophon – I have some doubts though, I suspect at the time human welfare was quite a low priority, never mind equine.
I have a similar bit in my collection : 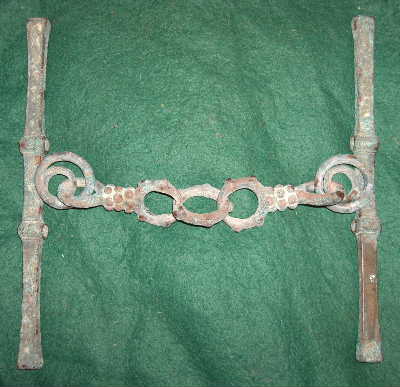 The last gallery had parts of the private collection of John Tradescant, including Henry VIII’s stirrups, Charles II’s spurs and some 16th century “Barbary” spurs which looked very like modern Arab prick spurs – more on those another day.
On my return from Oxford I picked up a veterinary journal where I read an interview with Prof.Bob Cook . He referred to the bit as a piece of Bronze Age technology, which rang true after my day at the museum. Prof Cook also made some good points about the use of bits and our unquestioning acceptance of them. He has developed a bitless bridle, I know nothing about it except that it isn’t a bosal or a hackamore, but there is more information at www.bitlessbridle.com .

This entry was posted in Horse Bits, Uncategorized. Bookmark the permalink.