This is a poster for the hunting season from the Great Western Railway.

After an afternoon trawling the internet for references I have seen several examples of purpose-built horse boxes for the railways. There is one at Swindon railway museum that has space for three horses and accomodation for three grooms. It’s not far from here, I should visit the museum to see it.

I had always assumed that in the days before motorised horse transport everyone would hack to meets. Many people did, of course – apparently Melton Mowbray was such a popular centre for hunting because it was in the middle of three hunts, the Quorn, the Cottesmore and the Belvoir. In the early twentieth century a keen hunt follower could hunt six days a week.
Ladies could have their groom ride their horse to and from a meet, special groom’s pads would fit on the sidesaddles converting them for use astride.

Rail transport of horses for hunting and racing reached a peak in the 1920′s to 1930′s. GWR proudly advertised that they could transport horse & rider from Paddington in London to hunting country in the New Forest in one & a half hours.

It was still a major undertaking, if you have ever spent any time trying to load a reluctant horse into a box just imagine if the box were attached to a steam locomotive… Maybe they loaded the horses far away from the engine & coupled the box to the train afterwards…. I need to research this further. 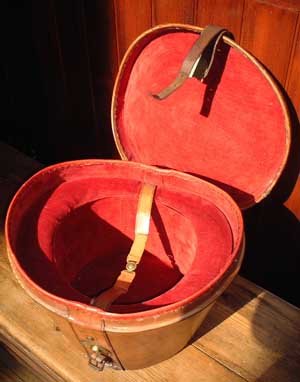 The equipment required was fairly remarkable too – travelling light wasn’t really an option. As well as ordinary tack there would be a top hat in leather box, heavy leather suitcases, wooden boot trees (lovely, but not exactly as light as modern plastic & metal). And there would be flasks, sandwich cases, rugs….
A couple of years ago I saw a beautiful small portable saddle horse made of oak with cupboards underneath and a top section that could fold out into a table. It had wheels and a metal loop at one end where it would be anchored in the train carriage so that it could not roll around.