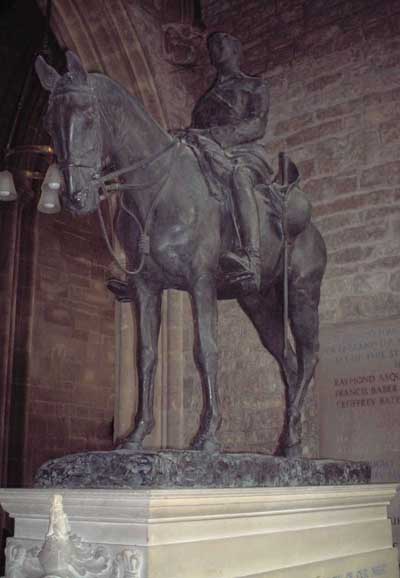 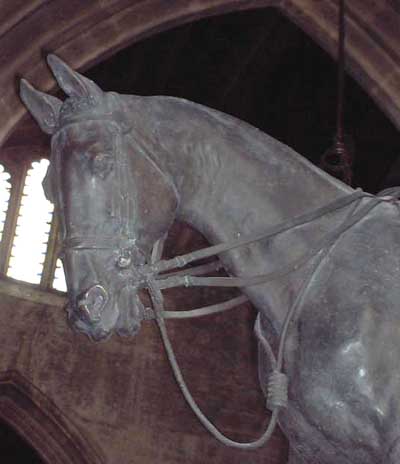 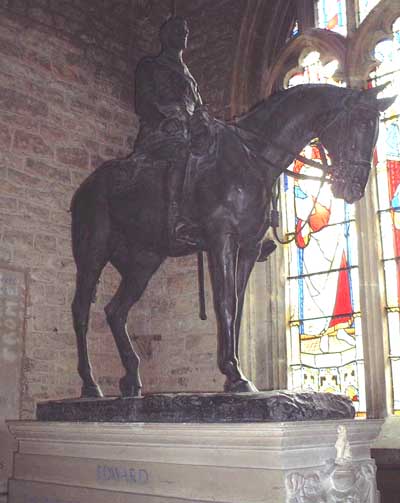 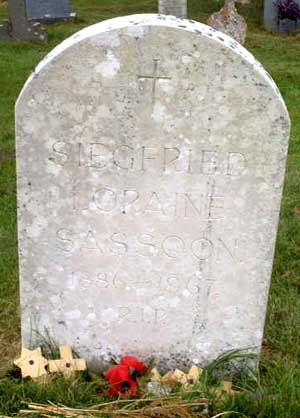 The 11th of November seems an appropriate day to blog about the memorial to Edward Horner in St. Andrew’s Church in Mells, Somerset.

The bronze equestrian statue by Sir Alfred Munnings stands on a stone plinth designed by Sir Edwin Lutyens. It commemorates Edward Horner, who died in France in November 1917 from wounds sustained at the battle of Camrai.

It is a stunning sculpture – if a little romanticised – Horner, who was a lieutenant in the 18th Hussars, would not have been mounted in that final battle. And his body lies in France, not Mells.

My photos don’t do the piece justice, it’s worth looking at better ones on sites like this Flickr page.

Munnings was a famous equestrian artist, apparently this was his first public foray into sculpture. He records making the statue in his autobiography “The Second Burst“.

A few years ago the statue was moved (amid a certain amount of controversy) from the small Horner family chapel into the main body of the church. Apparently it had originally been planned to position it under the bell tower, but the floor was not strong enough to support it there. It seemed fitting in the small family chapel, but at least one can now stand back and see the whole sculpture properly.

Horner was not the only casualty of the Great War in the village, Lutyens also designed a village war memorial, and Eric Gill inscribed a memorial plaque for Raymond Asquith.

The church also holds a beautiful plaster plaque of a peacock – a memorial to Laura Lyttleton by Edward Burne Jones. The Horner family lost another son, Francis, commemorated in a stained window by William Nicholson – this shows St Francis among fishes which seem to be turning into birds.

Siegfried Sassoon is buried in the churchyard

This entry was posted in Military horse, Uncategorized. Bookmark the permalink.