However specialised your field of collecting, someone somewhere in the world probably shares your passion . I was delighted to find this book : “Horsing Around – 19th Century Cast Iron Hitching Posts”, it’s a catalogue of an exhibition of (surprise, surprise) hitching posts from the collection of Phil & Bunny Savino at the Albany Institute of History & Art in 2008. It focuses on American hitching posts, which were commonly freestanding cast iron posts; in Europe tethering rings or finials were more often attached to pre-existing walls, posts or pillars. The hitching posts were decorative as well as functional, common designs were horse heads, patriotic emblems such as the flag or an eagle, dogs, snakes, people and geometric or architectural shapes. Their makers are rarely identified and they fall into the category of “Folk Art” 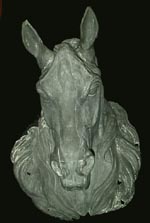 I had bought the book in the hope of identifying the pair of horse heads shown above, I found one example in it that was similar but not identical . These are probably English and would have been placed on top of pillars or posts in a yard. The vendor described them as “19th Century cast iron horse heads possibly from a horse butcher’s shop”. I’m sure that’s wrong, I sold a French Boucherie Chevaline zinc horse head model a few years ago – it was much lighter in weight so that it could be hung on a wall & didn’t have bit rings (I suspect that thinking about one’s favourite riding horse before tucking into a steak doesn’t help the appetite )

Christies sold a very similar white painted pair in 1999. They described them as “A pair of English white-painted cast-iron horse head tethering-post finials Circa 1870. Each with two rings in its mouth, on a circular base 10 in. (26 cm.) high”. They can be seen here

The horse heads are made of cast iron, each was originally cast in two halves – a seam is just visible along the back of each mane. There are defects around their bases, presumably from when they were removed from their posts or pillars. The quality of the casting is very good and the details of the manes, eyes and even facial blood vessels are clear. The bit rings are in good order & still move freely. They have been painted gloss black, there are a few very small chips in the paint. They stand 10½ inches (26cm) high, and they are very heavy